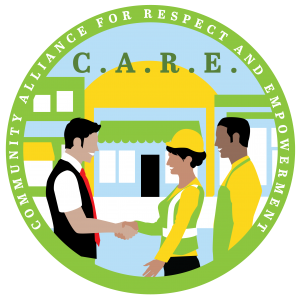 The C.A.R.E. Campaign is a joint effort led by workers and their families, community organizations, faith leaders and honest businesses to ensure a strong, vibrant and sustainable community where everyone thrives.

The campaign began as a response to the overwhelming wage-theft that occurs throughout Chicago, especially on the Southeast Side.  According to a 2010 study conducted by UIC, low-wage workers in Chicago and surrounding Cook County lose on average more than $7 million every week due to labor and wage law violations. The scope and depth of this wage theft is especially significant for Latino immigrant workers.

In 2014 CTU-IWP conducted its own survey of low-wage workers in the 10th ward to expound on these findings and  better understand how the issue impacts the community on the Southeast Side. The survey determined that  2 of every 5 low-wage workers in the community has experienced or currently experiences some form of wage theft, with those most affected being women. These injustices have significant implications for the community including unsafe and/or unstable living conditions, food insecurity, health issues and safety concerns among others.

The mission of the C.A.R.E. Campaign is to shift the balance of power in our community that extends beyond the workplace through education, leadership development, grassroots worker training and organizing. In doing so, change the climate, policies and attitudes that allow these issues to persist and ensure that all workers are treated with fairness, dignity and respect.

As part of joining the C.A.R.E. Campaign, local businesses will sign the C.A.R.E. community agreement and receive a CTU led training and orientation for their workers. They will also receive a C.A.R.E. sticker designating them an ethical employer in the community. As part of the campaign, regular educational community outreach will be done to encourage support of local businesses that have signed the community agreement and by doing so, help us create a more sustainable and just local economy on the Southeast side that is based on good jobs and a healthy community.

**The entire CTU-IWP 2014 report is available in English [here] and in Spanish [here].